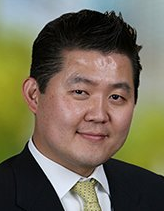 James Pak is an experienced patent litigator and trial lawyer in Quinn Emanuel’s Los Angeles office.  He handles high-stake patent disputes for clients in the U.S. federal courts, before the U.S. International Trade Commission, and in confidential portfolio license negotiations around the world.

In the courtroom, James has helped many clients in diverse industry sectors obtain complete victories.  As lead counsel for a global automotive company, he obtained a dismissal with prejudice against a well-funded NPE for lack of standing in the Central District of California, which was affirmed by the Federal Circuit in a precedential opinion.  In a parallel IPR proceeding, his team obtained cancellation of all asserted claims.  For a global leader in the 3-D cinema industry, James co-led the trial team on the technical issues, obtaining a finding of infringement of all asserted claims against all accused products in the USITC.  In defense of the second largest laminate flooring product manufacturer, he helped the client obtain a jury verdict of non-infringement and invalidity of all asserted claims in the Eastern District of Wisconsin.

James has been a long-term trusted advisor to clients facing many difficult claims.  In particular, he has deep experience in representing clients in confidential license negotiations dealing with Standard Essential Patents (“SEPs”) and FRAND obligations since 2001, spanning from 1.5G standards to the current 5G wireless protocols.  In addition, he has worked with clients on patent claims directed to display devices, semiconductors, audio and video encoders and decoders, fingerprint recognition devices, and internet content delivery services.  For his role across various industries, James has been recognized as one of IAM Licensing 250 – The World’s Leading Patent and Technology Licensing Practitioners, selected by the IP Media Group.