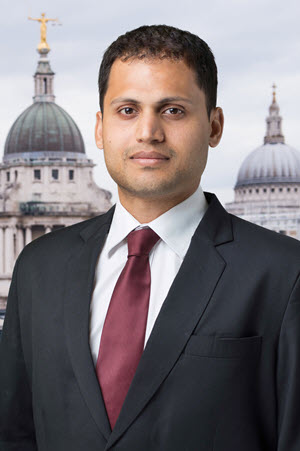 Jagdish Menezes is a senior associate in Quinn Emanuel’s London office.  He joined the firm in 2014.  His practice focuses on international arbitration (investor-state and commercial), as well as multi-jurisdictional disputes involving issues of fraud and corruption.  He has specific experience in disputes involving sovereigns as parties or counterparties, or raising government relations concerns.

Jagdish obtained his undergraduate degree from the National Academy of Legal Studies and Research, Hyderabad, India, where he graduated with eleven gold medals, including two medals in arbitration.  Thereafter, he obtained his B.C.L. from the University of Oxford, on a full scholarship.  He was also a member of the team that won the 19th Willem C. Vis International Commercial Arbitration Moot Court Competition in Vienna, 2012.  Prior to joining the firm, Jagdish worked with the Singapore International Arbitration Center, assisting with case management, legal research and the drafting of a script for a simulation of an arbitration.  He has previously also clerked with a judge of the Bombay High Court.  He is admitted to practice in India and as a Solicitor of England & Wales with Higher Rights of Audience.

Jagdish was recognised by the 2020 UK edition of Legal 500 as a key lawyer for commercial disputes and described in a testimonial as a “tremendous professional” with an “extremely impressive…degree of commitment and mastery of the case and applicable laws of multiple jurisdictions”. He is also listed among the Arbitration Future Leaders (Non-Partners) in the Who’s Who Legal Guide 2023.